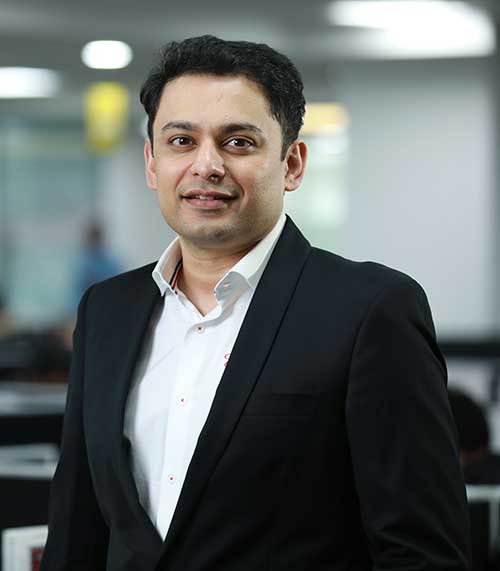 India is the largest consumer of whiskey in the world and the alcohol sector offers a lucrative revenue stream for the government. Yet, the industry in general, and beer in particular, is at the receiving end of a complex tax system. There are a plethora of rules and regulations, none of which follow a uniform pattern, and which do not create distinctions between the different alcohol categories like beer which has moderate alcohol content and harder forms of alcohol like whiskey, vodka, rum or gin.

This was seen in the recently-implemented Corona Cess tax when liquor shops opened up upon lockdown relaxation. States that imposed the harsh tax on liquor MRP saw a sharp drop in revenues. Anheuser-Busch InBev’s President of South Asia, Kartikeya Sharma, calls for policy reforms that promote Fair Beer Trade, telling us why this is harmful for everyone involved including the consumers.

There are a plethora of rules and regulations, none of which follow a uniform pattern, and which do not create distinctions between the different alcohol categories like beer which has moderate alcohol content and harder forms of alcohol like whiskey, vodka, rum or gin. Globally, taxes on alcohol are based on pure alcohol content; the higher the alcohol content, the steeper the corresponding taxes, thus encouraging consumers to drink low or moderate alcohol beverages. For example, a consumer in Belgium pays five times more for hard liquor than beer and in Germany, it is six-fold. In India however, the excise duty structure is in dissonance with global best practices – meaning, States follow a policy where beer is taxed not on the alcohol content but determined by volume and price. This inevitably makes the product more expensive for consumers when compared to Indian Made Foreign Liquor (IMFL) or country liquor. Each state sets its own excise duty/policy further adding to the complexity in pricing, resulting in beer, which is a recreational drink with ABV of between 4% and 6%, being taxed 60% more than hard liquor which has an ABV of more than 48%. 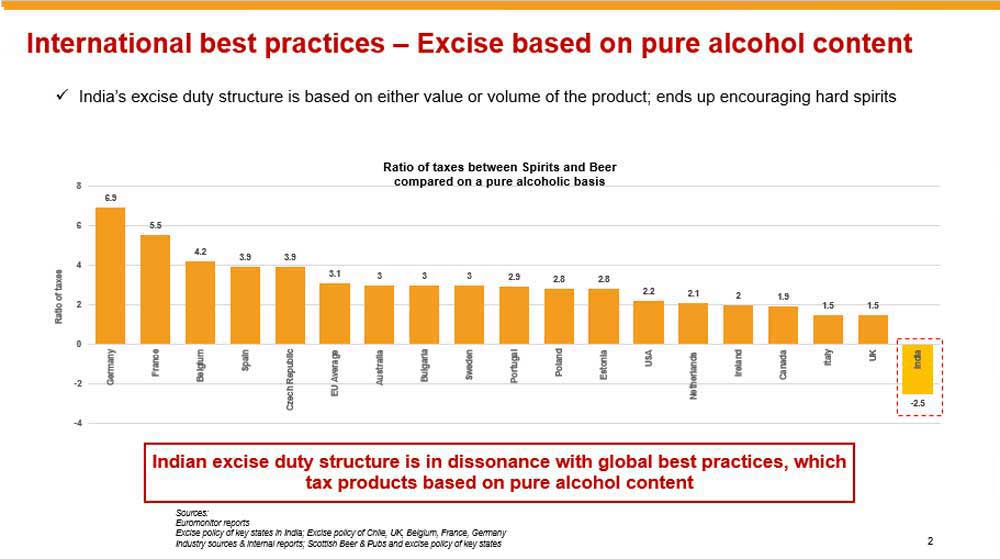 The reopening of liquor stores nationally brought about some much-needed respite after a 40-day lockdown, but it was short-lived. The introduction of the COVID Cess, ranging from 10% to 75% in different states has had an adverse effect on the beer sector. The surge in prices has consequently resulted in a slump in demand, with industry estimates showing a decline in overall beer volumes, to the tune of -60% to -90% when compared to the same period last year. Beer, in normal circumstances, is taxed 60% times more than hard spirits, unfairly putting a ‘high-end’ label on a moderate alcohol beverage. This cess only deepens the price impact and coming at a time when consumers are forced to cut back on discretionary spending, pushes them towards harder forms of alcohol, low-quality low-priced products and illicit or spurious liquor. Consumers compromising on the quality of drinks due to this exorbitant price hike can lead to severe health implications.

When we compare the volume sales of beer in the last few weeks with the same period last year, the sales have drastically declined due to the implementation of the COVID Cess. As a result, most states are reporting negative revenues. Take for instance Delhi – The national capital was the first to implement the COVID Cess of 70% on the retail price to earn additional revenue. However, after a month, the state government has had to reverse its decision as it turned out to be counterproductive and we welcome this reversal. Owing to the implementation of the duty hike, the price of beer has increased by more than 50% in Odisha, 35% in West Bengal and 25% in Puducherry (15% to 250% for brands registered in Tamil Nadu) to name a few, resulting in a distressing problem not just to businesses but to consumers as well. Despite an initial surge in sales, there was a dramatic decline in revenues. Consumer demand has plunged, causing a significant decline in overall beer volumes: -60% to -90% across a few states and union territories like West Bengal, Odisha, Telangana, Rajasthan, Karnataka and Puducherry to name a few in May 2020 when compared to the same month last year.

This arbitrary move to implement the COVID Cess has hampered the growth in the beer sector with industry estimates stating that most states are reporting negative revenues. When we take a step back and look at it from a macro-level, there are far-reaching ramifications that need to be considered in the form of the impact of such high taxation on ancillary segments. As the price of beer increases further, demand drops, creating a domino effect on farmers, the entire supply chain ecosystem with barley malt suppliers and logistics partners, leading to a loss in revenue opportunities, employment and impacting the overall economy at large.

As far as the state governments are concerned, since additional cess on a heavily taxed moderate alcohol beverage like beer increases the cost burden on consumers, this is especially a wrong time to introduce such stringent policies. Consumers are now cutting back on discretionary spending and draconian policies such as the COVID Cess only nudges them towards harder forms of liquor, low-quality and even illicit or spurious liquor, all of which are detrimental to their health and well-being. Inaccessibility is also bound to result in the flourishing of bootlegging practices which will, ultimately cause loss in revenue for the states. We urge the government and lawmakers to consider the vast implications of such high taxes and hope that they introduce reforms that are in the larger interest of its citizens and the economy. 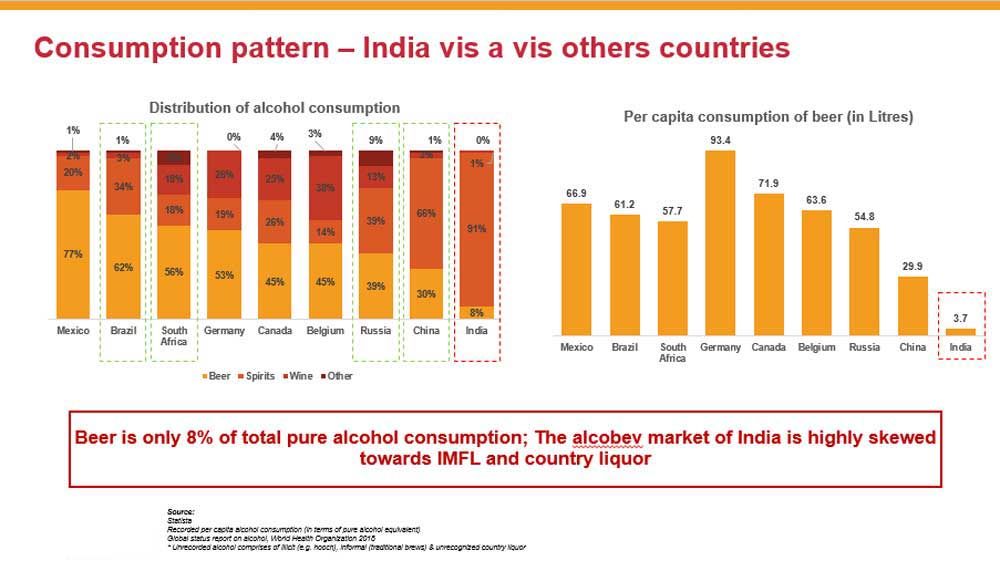 A major implication the high taxes has on a consumer’s health and drinking behaviour is that it nudges them towards alternative forms of alcohol like hard liquor with a lower price tag relative to the ABV in beer. It also forces consumers to opt for low-priced, low-quality alcohol and moonshine drinks due to the excessive price increase. All these have long-term, detrimental effects on their health and well-being. Beer is a moderate alcohol beverage that has low-alcohol content and the more expensive it becomes, consumers will seek replacement products that are harmful to their lives.

At the moment, there are two policies in India that have an adverse impact on the beer industry. One is the existing regime that taxes beer, a low-alcohol beverage, 60% higher than hard liquor. This coupled with complicated regulations and prohibition in a few states have led to the beer industry’s stagnated growth over the last few years. The other is the introduction of COVID Cess. Ranging from 10% to 70% across states, the levy has resulted in an excessive price hike that has negatively impacted beer sales specifically post the lockdown especially during summers which is the peak season for beer.

One of the best examples we can provide here is the recent excise policy by the Haryana Government. For this fiscal year, the state government introduced a policy that taxes beer and wine based on alcohol content. The state government’s policy of introducing a ‘super mild beer’ less than 3.5% ABV with a fixed excise duty ensures that it not only considers alcohol content but also the implications consuming beverages of higher alcohol content has on health. Looking at this model, we hope other state governments introduce similar reforms that cater to the best interest of their citizens.

Fair Beer Trade involves sustainable and equitable reforms that will aid not just the industry and economy but the consumers as well. The need of the hour is for the policy makers to be cognizant of how the tax reforms influence the consumption patterns in the country and introduce policies that moderate the drinking behaviour of its citizens. This can only be achieved through clear demarcations between low alcohol and high alcohol content beverages. As active supporters of policies that reduce harmful drinking, we hope there will be a paradigm shift in alcohol taxation policies in India that is based on alcohol by volume content. This will improve accessibility of moderate alcohol beverages like beer in the larger interest of the health and well-being of consumers.