Grimbergen, known for its delicious and refreshing Belgian-style beers, opens the doors to the future of Belgian beer as it unveils its innovative new brewery inside the famous Grimbergen Abbey near Brussels, Belgium.

The state-of-the-art Grimbergen Abbey Brewery will bring brewing back to where it all started when the abbey was founded nearly 900 years ago. It’s also the first time in 200 years that beers have been brewed by the monks that brewed in the Norbertine monastery before it was burned down by French revolutionaries in 1798. The monastery was later reinstated but the brewery and its recipes were thought to be lost.

The Abbey Brewery will serve as an innovation hub, combining brewing traditions drawn from the ancient books of the abbey’s library with new and innovative techniques to craft unique limited-edition batches of exceptional premium beers. 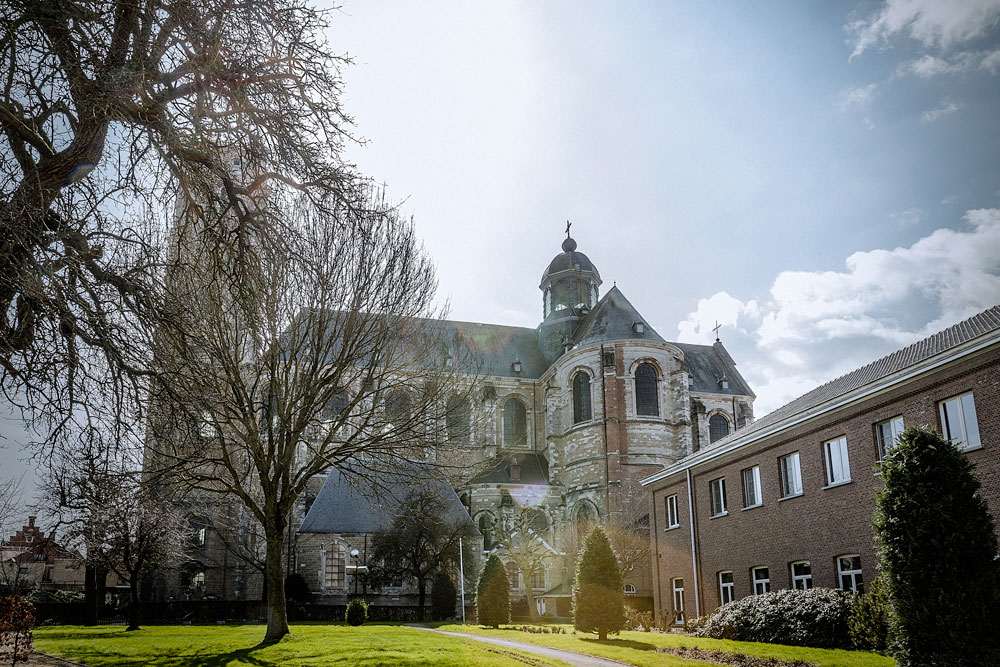 The Abbey Brewery was built in a close partnership between the Grimbergen Abbey and Carlsberg Group. Father Karel Stautemas, Provisor at the Abbey, was instrumental in building the new facility and has joined the brewing team as Abbey Brewer. After Covid restrictions are eased, he is expected to complete his brewing qualifications, allowing him and his fellow fathers to continue the legacy of generations of Fathers before him.

“It is a treat to be here at the beginning of Grimbergen’s next chapter and to experience what we believe will enrich the future of Belgian beer. Grimbergen is at the very heart of our growing portfolio of craft and speciality beer and it is contributing to the strong double-digit growth we’re seeing in the category. The new Abbey Brewery is an important step for us in continuing to develop our speciality brews to meet growing worldwide demand. We believe this beautiful Abbey Brewery will take us, and beer drinkers around the world, on an incredible journey of flavour discovery.” – Cees ‘t Hart, CEO of Carlsberg Group 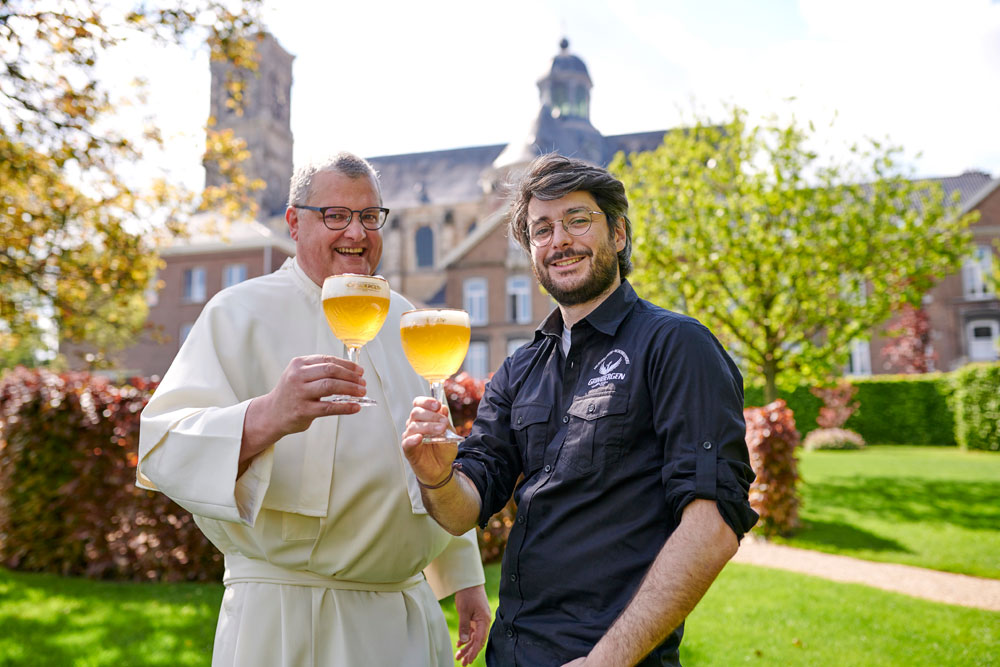 Curious to know more about the history of the Grimbergen Abbey and their shiny new brewery, read Brewer World’s exclusive interviews with Father Karel Stautemas (Abbey Brewer) and Master Brewer Marc-Antoine Sochon below. Here’s what they have to say!

Father Karel, tell us a bit more about yourself, the history of Abbey and the story behind it.

I’ll get started with the history first. Grimbergen Abbey has been burned down three times since its inception. This is why we put up the phoenix as our symbol. Despite the destruction, we always rose from the ashes and rebuilt the abbey brick by brick and that’s why our motto says ardet nec consumitur which translates to “burned but not destroyed”.

As for me, I’m always curious to understand what happens inside a fermenting tank and the science behind it. I’m all about tasting beer rather than drinking it. Being fascinated by many things in beer is how I made up my mind to get into beer brewing. 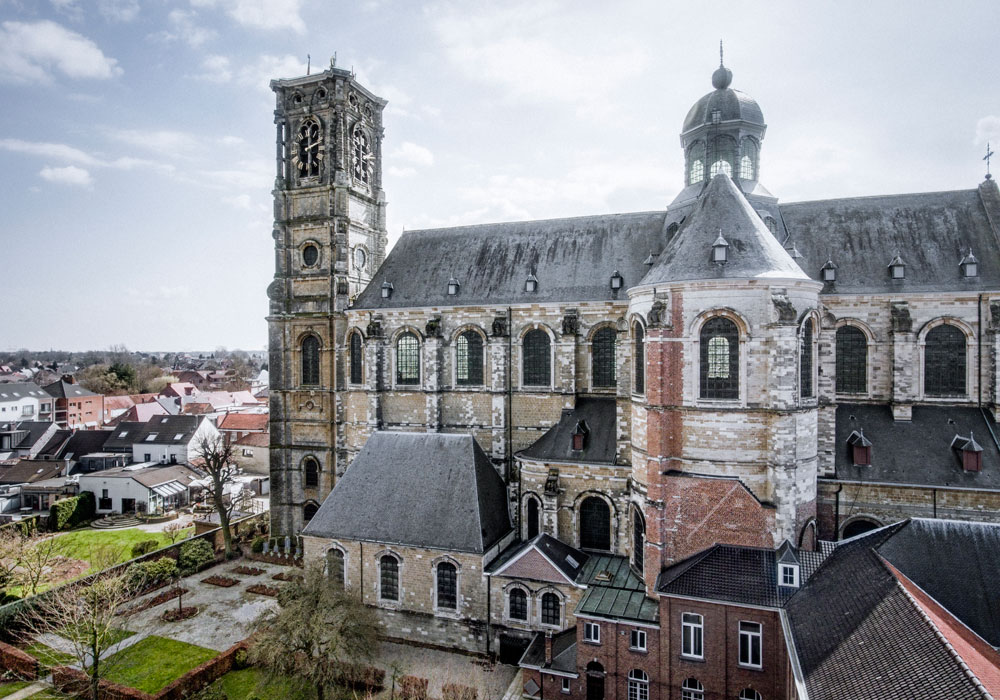 Marc-Antoine, can tell us a little about your beer journey so far, where are you from and how did you end up brewing at Grimbergen?

I started home-brewing at a very young age right from our parents garage and was very intrigued about the art of fermentation. I later went on to pursue a wine-making course, as in France there aren’t any diplomas which focus primarily on beer brewing. As the years have progressed, I have managed to find a bridge between wine and beer making, eventually carving my way into this. Prior to Grimbergen, I have brewed as an intern in France, Australia and then moved to Copenhagen, Denmark to brew for the Carlsberg group. This is how I got into the Grimbergen brewing project. And…. This is how I met Father Karel!

Father, can you describe a typical day in your life at the Grimbergen Abbey Brewery

I start off my day with morning prayers followed by breakfast in silence. Post this, I head over to the brewery to meet the team and of course Marc-Antoine. We discuss beers and taste it everyday to ensure everything is intact and the flavour is consistent. In addition, I have other duties to take care of, which involves managing Abbey building and other miscellaneous work. All in all, things keep me very busy and engaged at the Abbey. 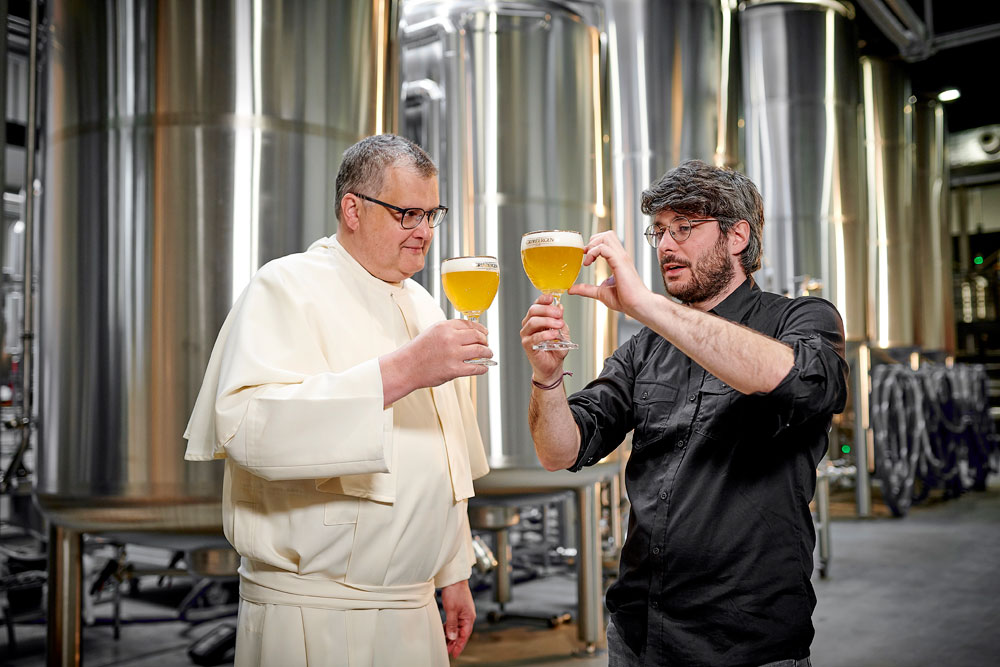 I’m curious to know if Grimbergen Abbey still has an ancient beer recipe book and have you guys scaled it up to suit modern brewing requirements?

Well, the recipes don’t exist anymore. Although from the archives we’ve seen that there is a list of ingredients mentioned where it tells you how many kilos of malt and hops were used for a specific style. This gave us a vague idea on how to formulate a recipe based on ancient archives.

Back then, the recipes didn’t matter to the ancient brewers as the beers were not commercialised. Consistency was not of any concern and therefore there is no evidence of brewers logging a recipe.

Marc, How do you think the brewing techniques in Grimbergen Abbey have evolved over the centuries?

To be honest, it hasn’t changed much here at the Abbey. All I can say is that we have optimised a few areas such as wort cooling, efficiency, fermentation and other factors. Every beer style at the Grimbergen Abbey is fermented at ambient temperatures just like it was centuries ago. 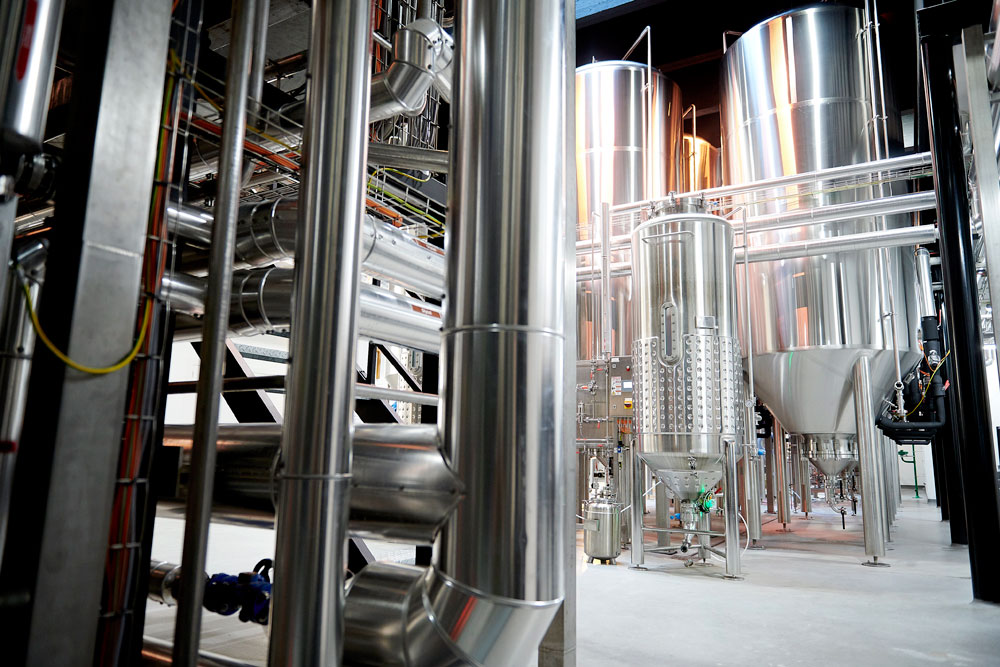 What is the maximum production capacity of the Grimbergen Abbey?

To commemorate the launch, Grimbergen has released three new beers named as Grimbergen Magnum Opus Brut Beer, Grimbergen Ignis Quadruple and Grimbergen Astrum Pale Ale. Why did you come up with these beers and is there a story behind it?

Astrum Pale Ale is very special as it is brewed with Australian Galaxy hops along with locally sourced Flemish hops for bittering. Centuries ago, brewers at Grimbergen Abbey sourced their hops locally and to keep this tradition intact, we have done the same. 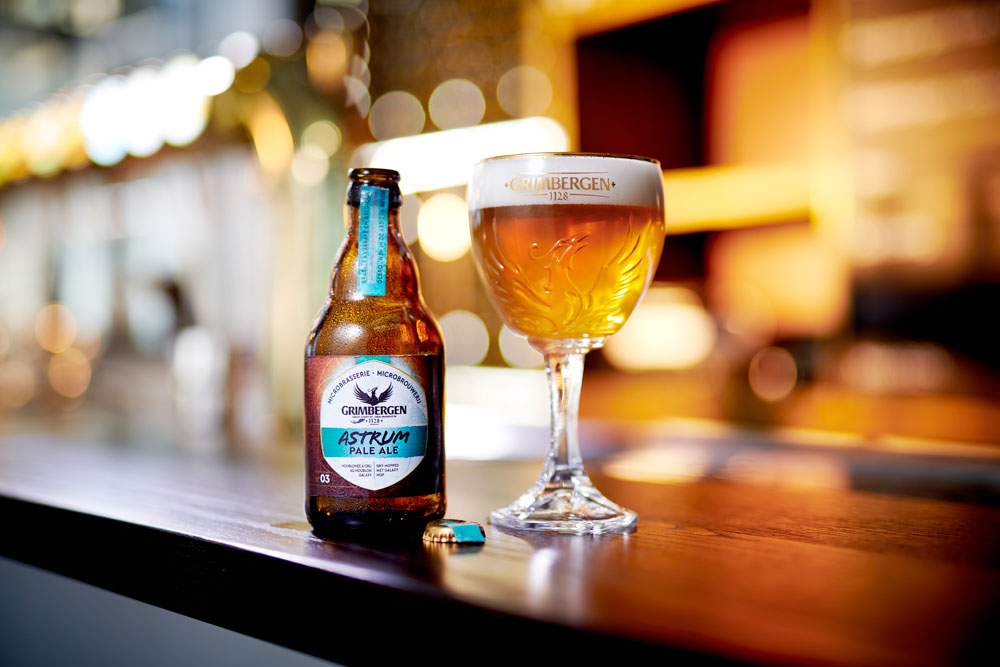 Magnum Opus Brut Beer is a masterpiece. This beer has a distinctive white wine character as we’ve fermented it with sparkling wine yeast. Using this yeast results in much drier beer which is very unique. Nelson Sauvin hops which have similar white wine like character were also used to elevate the experience. 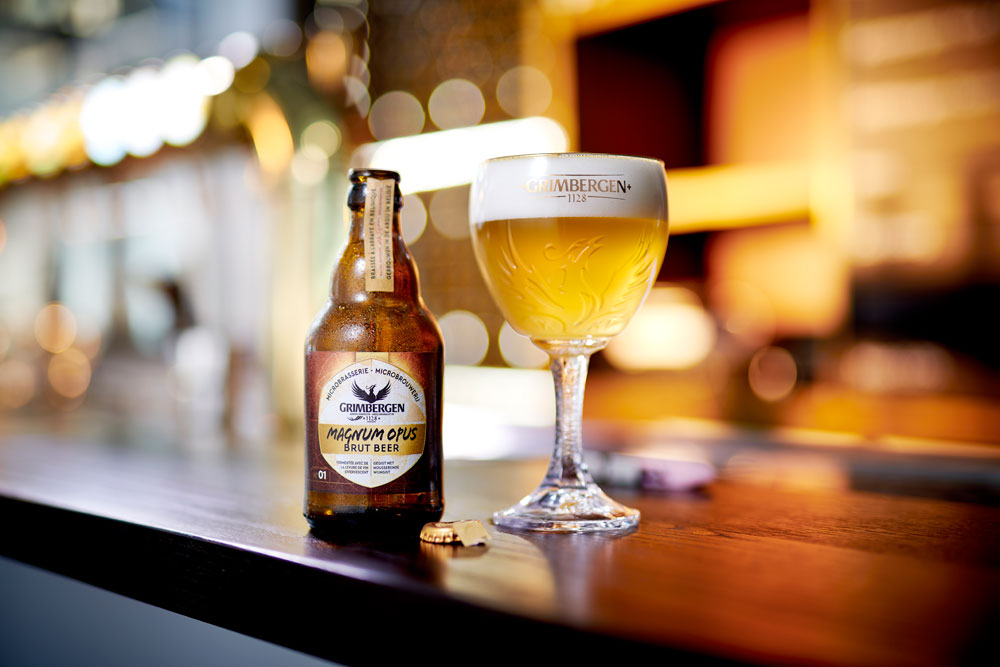 Ignis Quadruple is the biggest of the lot. It clocks in at 10% ABV. The Abbey’s history is the inspiration behind this beer. As you all know, the Abbey was burned down several times, we thought that it would only be appropriate for us to add locally sourced smoked malt in this style, to honour the legacy. 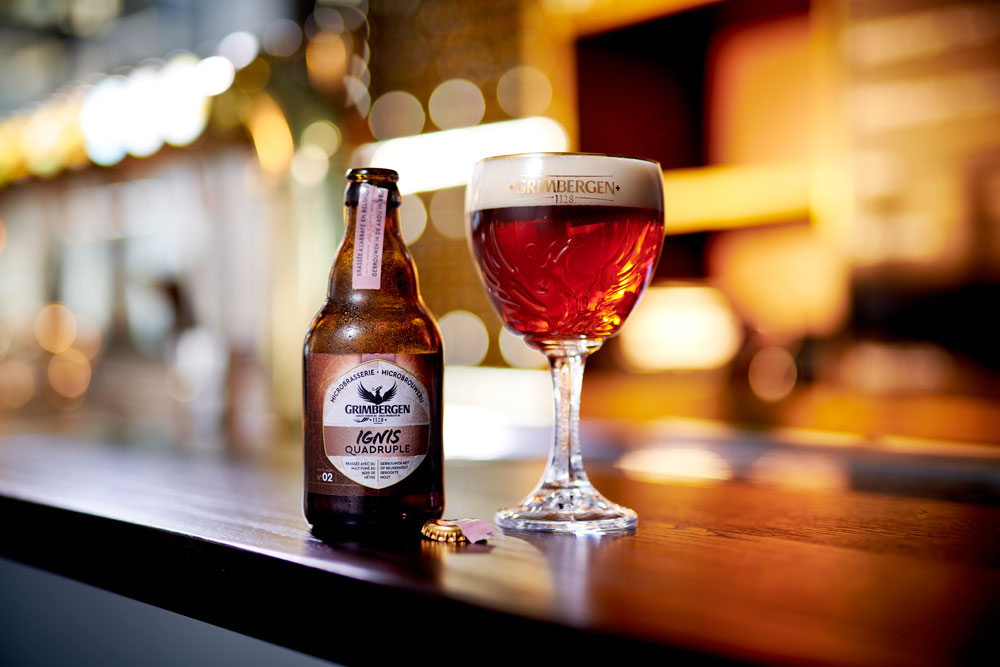 From the launch event, I’ve come to know that there would be a Grimbergen Brewery Experience Center coming up soon. What exactly is it? Can you walk us through that experience?

The experience centre is a treat to all the visitors. People coming in are first taken through the brewery tour followed by a sensory experience which showcases hop garden and all the flavours of Grimbergen beers. To make it even better, visitors are allowed into the Abbey museum which showcases ancient artefacts and narrates the history of the Abbey to emphasise how it has been rebuilt from time and time again. 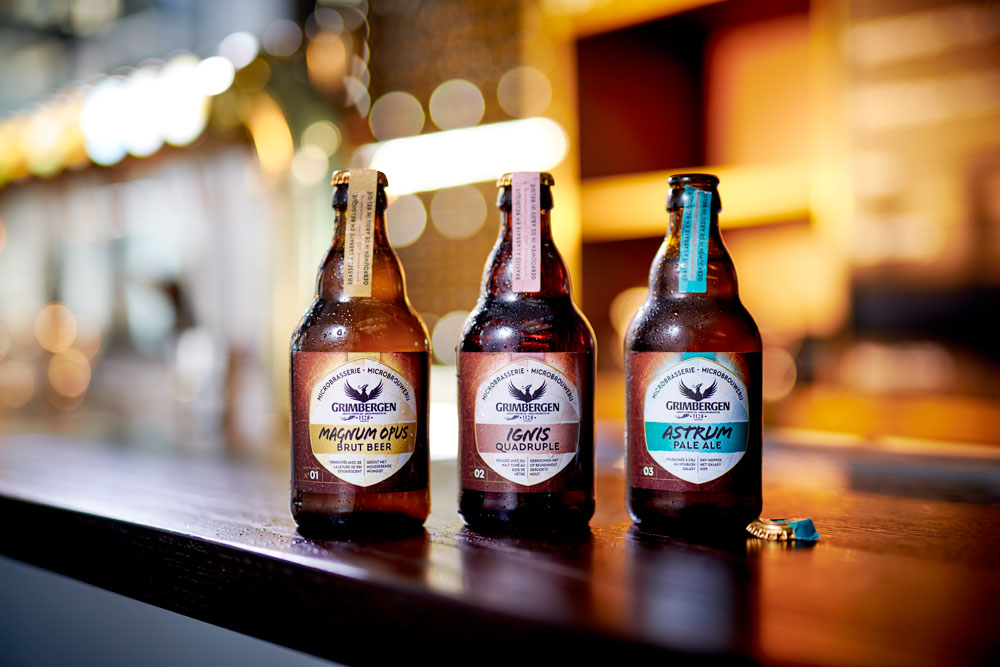 Lastly, I want to know if there’s a chance of Grimbergen making its way into the Indian market?

Asia is a huge market for the Carlsberg group and specifically in a country like India, we know that there’s a preference for drinking high ABV beers. However, bringing Grimbergen beers into India might be a plan for Carlsberg in the near future as it definitely is a market to focus.

Grimbergen Abbey Brewery also features an on-site bar and restaurant giving visitors the opportunity to savour the rich brews and pair them with dishes from the restaurant Fenikshof. Later this year, Grimbergen will also open a Brewery Experience Centre that will give visitors the opportunity to immerse themselves into the rich heritage of Grimbergen and the magic behind its innovation.