Yeast are living organisms. Like every other, their lifespan will be greatly influenced by nutrition and care. Additional attention to the yeast can result in more consistent fermentations with richer, more complex flavours and aromas.

Yeast is fundamental to the brewing process. It is thought that 950 compounds are involved in giving beer its aroma and flavour – and 400 of them are produced by yeast1.

Aroma is just one example of the complexity and nuance yeast contributes. Yet, the brewing process itself is not ideal for their growth and development. The presence of ethanol alcohol, carbon dioxide, and the pH of the wort can create a stressful environment.

When yeast are under stress, their performance in brewing may not be ideal and even result in off flavours or sluggish, stuck fermentations. On the other hand, offering bountiful nutrients and pleasant growing conditions can lead to consistent, reliable fermentations. 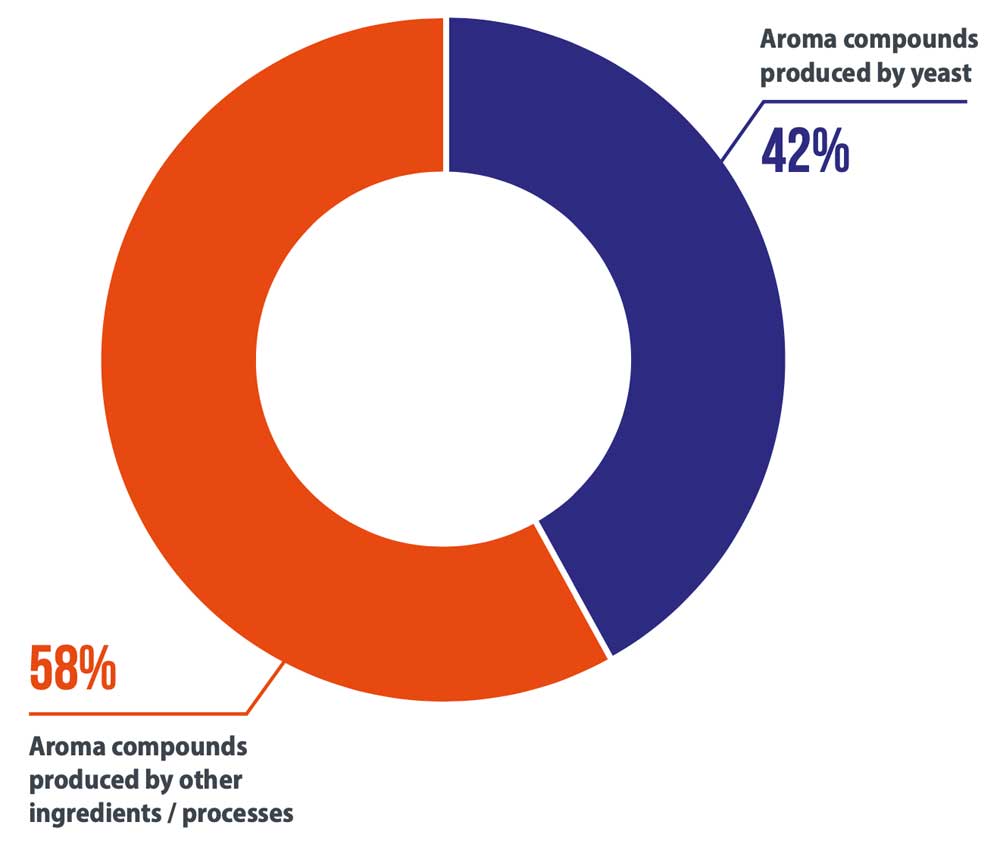 Ideally, an all-malt wort can provide the necessary components for a successful fermentation. However, it is common to have deficiencies or low-quality malt.

High gravity worts or high adjunct fermentations can lack the essential balance of compounds for the yeast to properly function.

For example, increased extract content often is achieved by either producing a concentrated wort or adding sugar syrup to the fermentation medium. The resulting wort nutrient composition can cause yeast fermentation problems, including incomplete or slow fermentations2.

Oxygen, a key yeast nutrient, is typically required by yeast immediately after the start of fermentation. Injecting oxygen or air is not normally required for standard fermentations using active dry yeast on first pitch.

Common deficiencies will vary based on the wort, yeast, and the intended result. In general, the wort can lack sufficient nitrogen, zinc, pantothenic acid, and biotin – or have an imbalance of magnesium to calcium21,22,23,24. This can result in less robust yeast growth and lower enzyme production.

Supplementing with yeast food is a common practice that can help address wort deficiencies. Not all supplements are equally available to the yeast, and some supplementation options may create as many challenges as they address.

In this article, we review the five nutrients brewers may consider supplementing to improve
their fermentations, which can influence the resulting product’s flavour and aroma – among other characteristics.

Nitrogen is a nutrient that is most likely needed. Without sufficient nitrogen, yeast will not grow or ferment. Nitrogen is an essential element that is needed for proper yeast nutrition. About 10% of the dry weight of yeast is nitrogen5. Sources of wort nitrogen are mainly amino acids, ammonium ions, and di- and tripeptides6. Nitrogen availability strongly impacts the resulting product’s composition and flavour7. 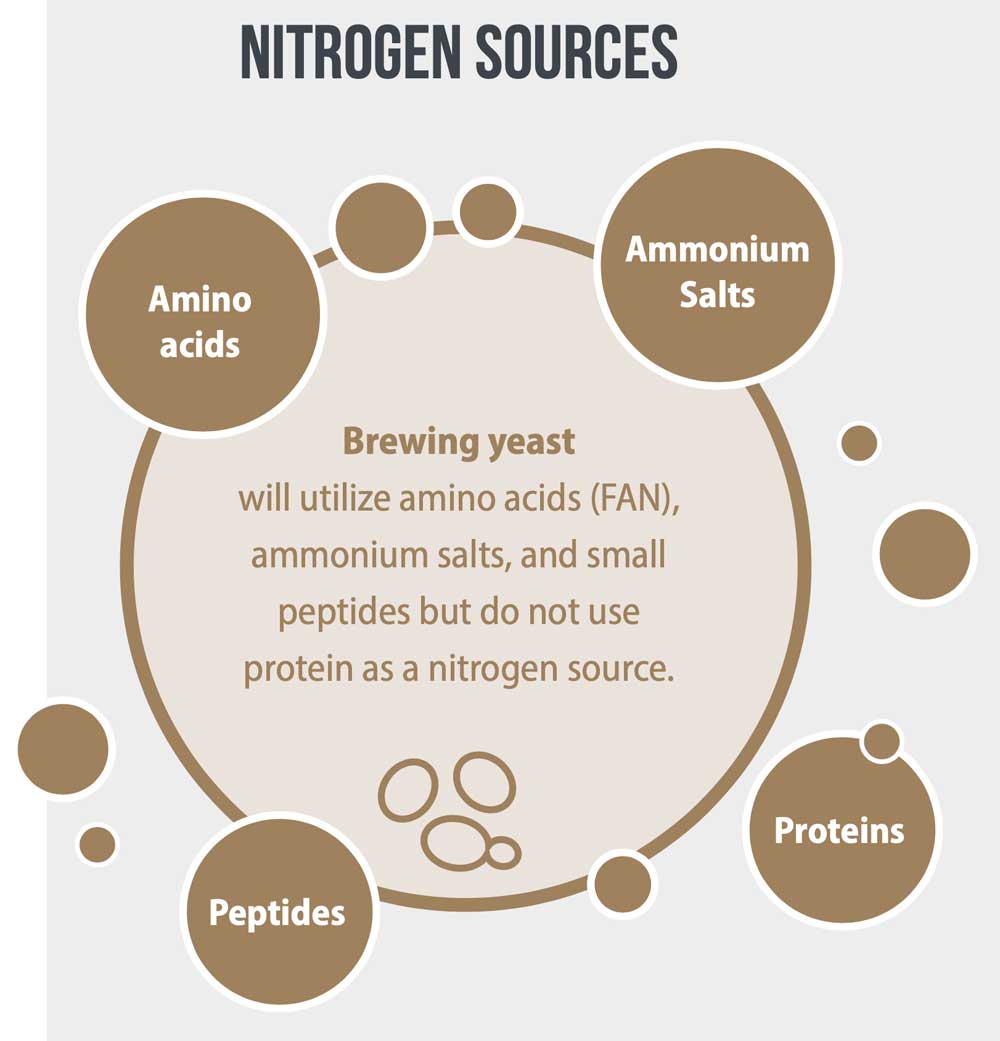 Depending on the amount used, adjunct additions will dilute trace nutrients and nitrogen availability in the wort, making it necessary to provide supplemental nutrient additions1.

Free amino nitrogen (FAN) refers to the organically available nitrogen that is present in wort. The majority of FAN is produced by proteolytic enzymes from malt during the malting and mashing process. There is very limited proteolytic activity from yeast. Also, a minority concentration of small peptides are produced by the hydrolytic action of extracellular yeast proteinases.

FAN has been regarded as the preferable indicator for predicting healthy yeast growth, viability, vitality, fermentation efficiency, and beer quality and stability.

Yeast autolysates naturally contains a good source of amino acids, vitamins, minerals, and other micronutrients. Compared to mineral salts, yeast autolysates provide a bioavailable source of nitrogen, which will be slowly taken up by yeast during fermentation. This helps avoid stressful conditions for the yeast. Yeast autolysates also can be used in brewing applications adhering to all-natural or clean standards. 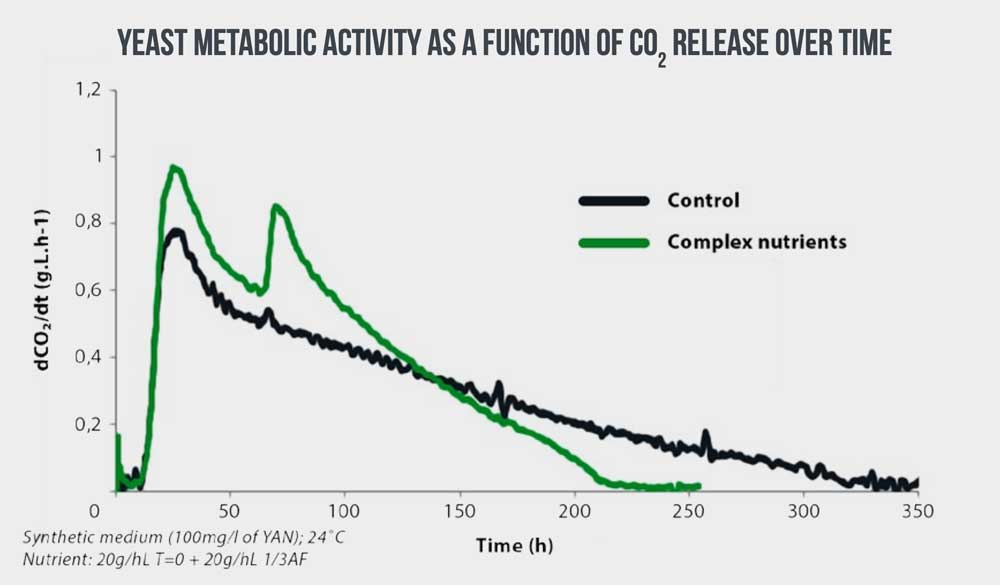 Biotin supplementation is required for most brewing applications. It is part of the vitamin B family. It is a catalyst for multiple important reactions such as amino acid metabolism, fatty acid biosynthesis, and energy metabolism. Biotin is also an important cofactor for enzymes catalysing carbon dioxide transfers12.

Studies in winemaking show that the imbalances between pantothenate levels and nitrogen can result in strong yeast mortality (more than 90%) at the beginning of the fermentation and can lead to a stuck fermentation.

Researchers concluded that yeast cell death was triggered by starvation for a set of micronutrients, including pantothenic acid7,14. A wort that is deficient in pantothenic acid will often get sulfuric off-flavours.

During wort preparation, approximately 95% of zinc from malt is lost with spent grain.

Zinc deficiencies can cause stuck fermentations and flocculation problems. Supplementing zinc at sufficient levels can positively influence the metabolism and fermentation performance of brewing yeast to create:

The risk of encountering low concentrations of zinc in malt worts is very high due to zinc binding and coprecipitation with proteins during the malt wort boiling process19.

The requirement of zinc for yeast can be strain dependent, but on average the range of 0.15-0.30 mg of zinc/L is the minimum requirement. Zinc levels less than 0.1 ppm can cause stuck fermentations and affect beer quality.

Zinc sulfate,is a common way to supplement this mineral. However, this form is less bioavailable than other forms and can wind up in the trub.

Zinc-enriched yeast, is an active, dried yeast that has been enriched with high concentration of zinc can be added to provide a more bioavailable form of this nutrient. Specific enriched yeast brands can allow fermentation at lower temperatures for a “cleaner” taste.

Yeast sugar metabolism is strongly influenced by the concentration of mineral components, most often magnesium and calcium 21. Yeasts have an absolute biochemical requirement for magnesium, and this metal is an essential cofactor for the function of more than 300 enzymes. Magnesium is involved in21:

Calcium and magnesium act antagonistically. High calcium in the medium can suppress the active enzymes that are magnesium dependent.  Calcium mainly acts extracellularly and is essential for activity of the enzyme α-amylase and phosphate precipitation – giving calcium an important role in wort pH control and flocculation25,22. 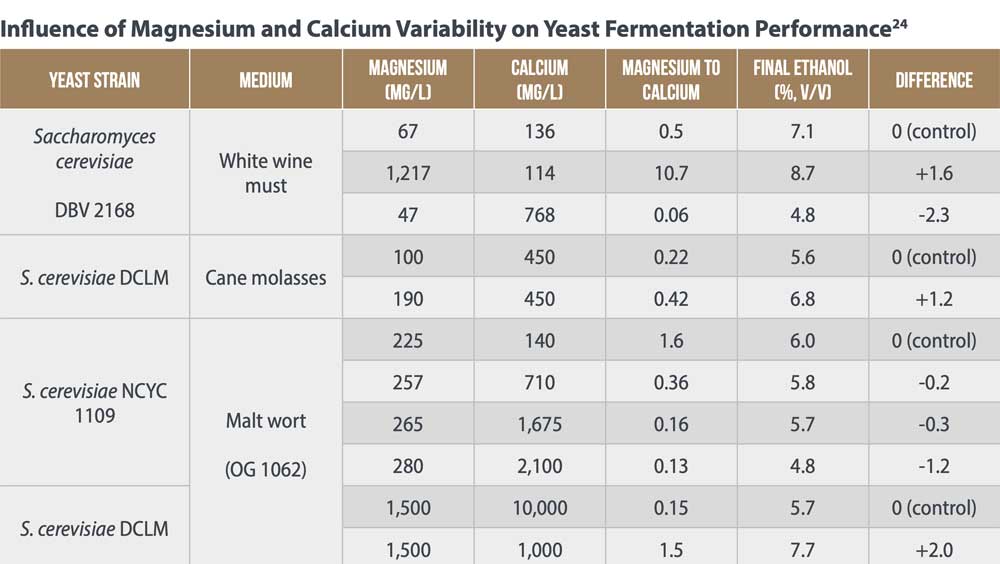 The table above summarizes the results of fermentations conducted using a variety of industrial yeast strains growing in different complex media. Although there appears to be both yeast strain and media-dependent effects, a general stimulation of fermentative activity by yeast is observed in the presence of a favourable Mg:Ca ratio.

High calcium levels are known to curtail cellular magnesium uptake and cell membrane proton-pumping ATPase activity, which is essential for nutrient translocation and cell growth. Elevating calcium may also have an impact on premature yeast flocculation and in reduction of media pH, which may slow yeast growth and fermentation24.

Give yeast proper nutrition to grow and perform. A balanced and healthy diet offers the same benefits for all living organisms – including yeast. With proper nutrition, brewers can experience improved fermentations, greater numbers of yeast produced, better flocculation and improved characteristics. Understanding the needs of yeast is an important step towards expertly crafted beers. 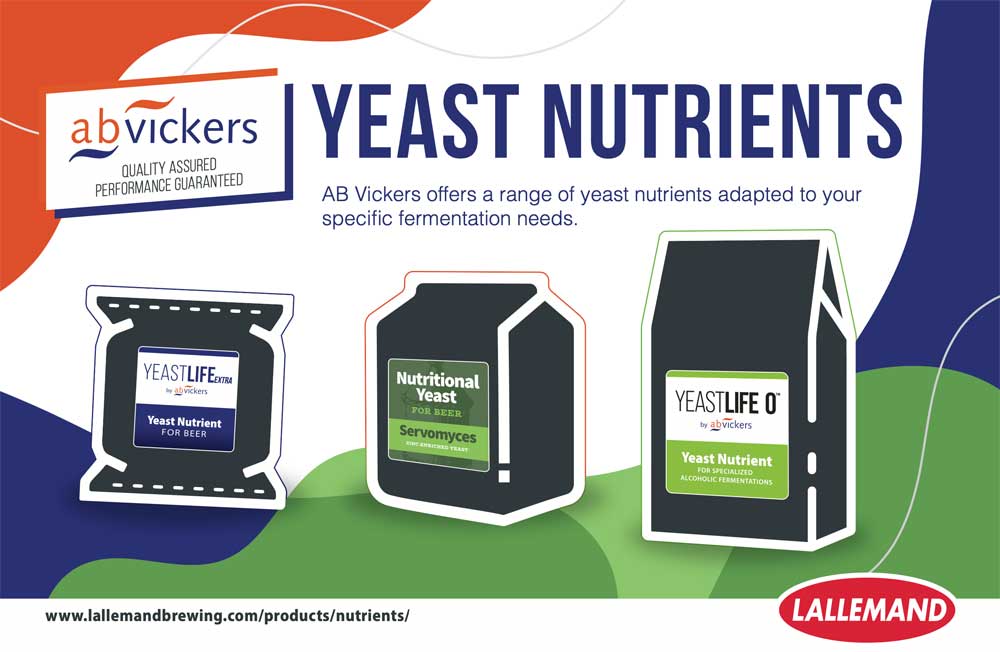 This article was adapted from a recently published white paper by Lallemand. All the references cited are listed below. 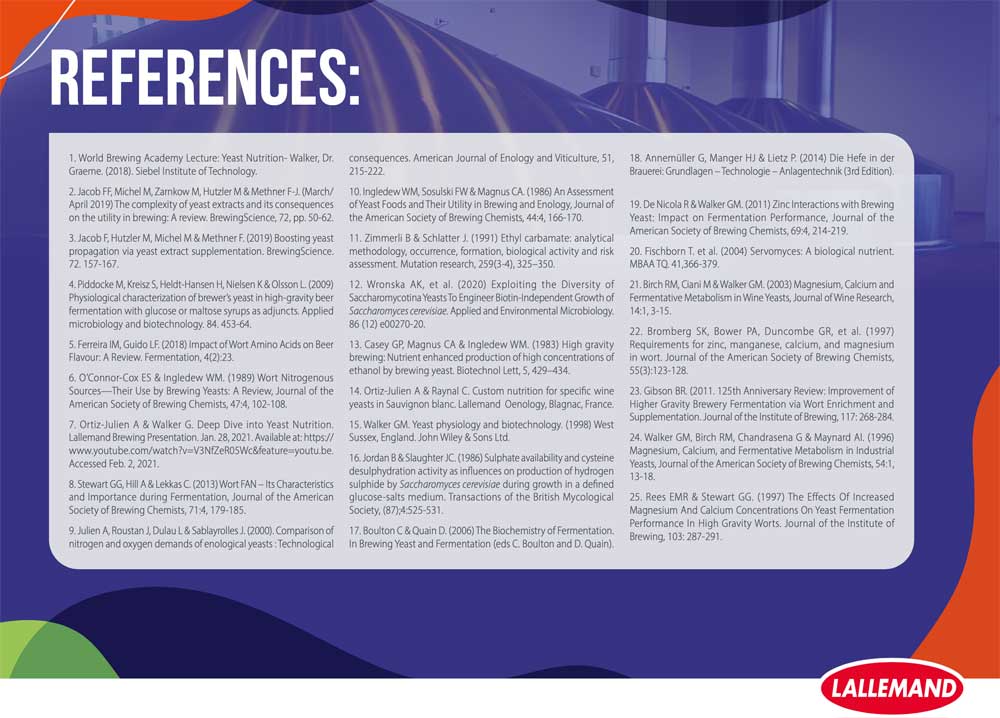