Behind the Brew – Fruit Infusions 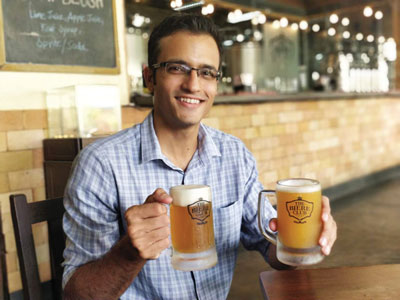 There is a certain elegance to fruit beers, something abstract that speaks to you from under that froth… a tale waiting to be told; a story of creation, a story of courage and innovation.

Beer, like its other alcoholic cousins, is an evolving beverage. The beer we drink today is far from similar to the ales of old. It has grown over the ages, in tandem with the palate of the drinker. Innovation, as I see it today, is broadly two-fold, viz.-a-viz. brewing. A brewer may either brew a classic style embedded with his unique signature or brew a new style altogether. Whether mild or extreme, innovation is innovation and a brewer who innovates ought to be commended when he or she does so. As humans, we are quick to dispense judgement on that which doesn’t suit our fancy, much to the dismay of people who put in the hard work. We’ve all done it at some point.

I quite think we must spend a tad bit more time appreciating the creative input that goes into brewing or anything else for that matter, for innovation is not everyone’s cup of tea or flagon of ale if you will. Innovation by brewing a new style fundamentally involves either brewing with novel raw materials or using flavouring agents such as fruits, herbs, spices, and the likes. Speaking specifically about brewing such flavoured beers, I can say from experience that it is no easy task. It involves a specific type of mindset. Brewers can’t be limited in their ideas. Any and all fruits, spices, herbs and I daresay, vegetables, are fair game as long as the brewer figures out how and when to use them. I have always made it a point to employ someone in my team who has had experience behind the bar. Bartenders work with flavours all day long and can offer an organic perspective when it comes to flavour compatibility.

Speaking specifically about brewing such flavoured beers, I can say from experience that it is no easy task. It involves a specific type of mindset. Brewers can’t be limited in their ideas. Any and all fruits, spices, herbs and I daresay, vegetables, are fair game as long as the brewer figures out how and when to use them.

To that end, our first step is to understand which of these flavours might be compatible with which styles of beer. We generate a list of possible combinations and work through each, one by one. The next step is to essentially make a beer cocktail with each set of ingredients and judge if the concoction is palatable. If it is, we scale it up. If not, we try to figure out how we can make it better. This is after all product development with no ceiling on creativity.

At The Biere Club, we have Carte Blanche, we are free to run through the fields as it were, free to pick and choose what we might use and what we won’t. We have come up with some obscure, funky beers that have only been possible because our entire team thinks of craft brewing as an extension of creativity and not the other way around. At the risk of sounding clichéd, we don’t innovate because we must; we brew because we can innovate. To echo Lewis Hamilton’s sentiment, As long as I can find it in me to come up with newer, more interesting beers, I shall remain a brewer.

Getting back to our thought process, once we have our flavours locked down, we have to figure out the time of addition and how we might process the ingredients. Ingredients can be added at any stage of the brewing process, from mashing all the way to conditioning. Addition during each of these stages results in a unique aroma and flavour profile. We have experimented extensively with mash-hopping to generate very distinct flavours. Adding a substantial percentage of hops during the mash brings out some very interesting hop flavours without the overbearing bitterness. This stage is well suited for some other ingredients like spices and herbs. We may lose a bit of the aroma and flavour throughout the rest of the brewing process, but what we are left with is a pleasant perception of that ingredient which we would not have been able to extract during boiling, for instance. The way we process ingredients also matters. The degrees of crushing peppercorns for instance or the way fruits are used (either pureed or whole or chopped); these small considerations may have a significant impact on the final product. This can only be learned if a brewer is willing to try all these different methods out and learn first-hand how different each one is. It is easy to get stuck in an endless cycle of brewing to please patrons, but when it comes to beer, taste is subjective. In my book, until you pick up proper off-flavours in a beer, you can’t judge it as bad; it may not be what you want to drink, it may not be to your liking, but it is still a beer brewed within the general guidelines of that style. People seldom understand that. Brewers want to impress a handful of regular beer drinkers rather than stay true to why they are craft brewers. Personally, if someone tells you they don’t like the beer you make and they can’t tell you why – then they’re just saying it to make noise. The only kind of feedback a brewer should pay attention to is constructive feedback, not the opinion of every third person who thinks they’re a beer expert. Opportunities are aplenty to innovate with indigenous ingredients abound. All a brewer has to do is seize a couple.

The onset of summer in India brings with it glasses of mango beer throughout the country. Here, we brew different recipes every year, with different mangoes, different ways of processing the mangoes, or anything else that we can do to try and learn something new about the fruit. We’ve even made a mango beer with seven different types of mangoes. Not that anyone was able to list out all the seven after drinking a glass, but it was unique in its own nature nevertheless. We’ve had a line of charcoal smoked fruit beers that we’ve served in the past. In fact, as I write this we have a charcoal-smoked orange ale on tap. We’ve brewed an Earl Grey-lemongrass Lager, a Cucumber-Coriander Lager, at least fourteen different types of beers with Honey: Honey-Ginger, Honey-Basil, Orange-Honey, and Honey-Clove to name a few. Every Christmas we make a special Christmas ale, with all those spices that spell Christmas. We’ve made beers with 70% millets. We’ve used Thyme, Rosemary, Basil, Sage, Mint, Coriander; we’ve used Cloves, Cinnamon, Vanilla, Cardamom, Black Peppers and Bay Leaves. Red and Green Chilies as well as Bird Eye Chilies, Kaffir Leaves, Pineapples, Apples, Oranges, Peaches, Mangoes, Lychees, Plums, Raisins, and Grapes. We’ve tried quite a lot of things here and I’ll be the first one to admit that we’re far from done.

Craft brewing, by its very nature, has no limitations when it comes to experimenting. There are process innovations, equipment innovations, and I’ve already mentioned product innovations. Anything that a brewer envisions can be accomplished in a craft brewery. I’ve heard of breweries abroad serving garlic beer. I’ve tasted a red-bean beer in Hong Kong, that I would have never thought of brewing, to be honest. All this brings to a head the possibilities that are afforded to a brewer by the empty canvas of craft. It is our beverage to innovate and all we have to do is paint… one stroke at a time, with our heart out and our palate open.