has more than 30 years of experience in Indian/multinational breweries, IMFL bottling plant and brewery green field and brown field projects and factory operations. Author of Brewing – A Practical Approach, is for practicing brewers, students pursuing careers in Brewing Science and consultants who provide technical advice to the breweries and entrepreneurs. He is a FELLOW of The Institute of Engineers (India) and Chartered Engineer (India), lifetime member of the Indian Institute of Chemical Engineers and Association of Food Scientist & Technologist (India). He is also selected as Professional Engineer by ECI, New Delhi. Mr. Bijay is currently associated with Yuksom Breweries Ltd (Sikkim) as Factory Manager (Unit Head).

Beer is a universally popular beverage, consumed worldwide. No one can deny that beer industry has changed drastically over the last three decades both in consumer preferences and production methods.

In addition to increased competitions, there have also been changes in legislation, the lowering of trade barriers and new processing techniques that breweries need to make themselves familiar with in order to remain as competitive as possible.

In fact, in some countries low alcohol beer have been the fastest growing sectors of the alcoholic beverages market. The reason for this is simple. People enjoy having a beer with lunch, but don’t want that sleepy feeling when they return to work. More importantly they want something that tastes like full strength beer and don’t just look like it.

There are several reasons for this:

Nowadays, it has been observed that no-alcohol (alcohol-free) and low-alcohol beer is on the rise due to several reasons. What will be the impact of the increasing popularity of these products on the consumption of alcoholic beverages – a big question? There is concern that breweries with no-alcohol (alcohol-free) products are less restricted by brand advertising. More advertising for the no-alcohol and low-alcohol brands will be created. This category is very attractive from a margin perspective owing to both its higher than average revenue and lower excise. 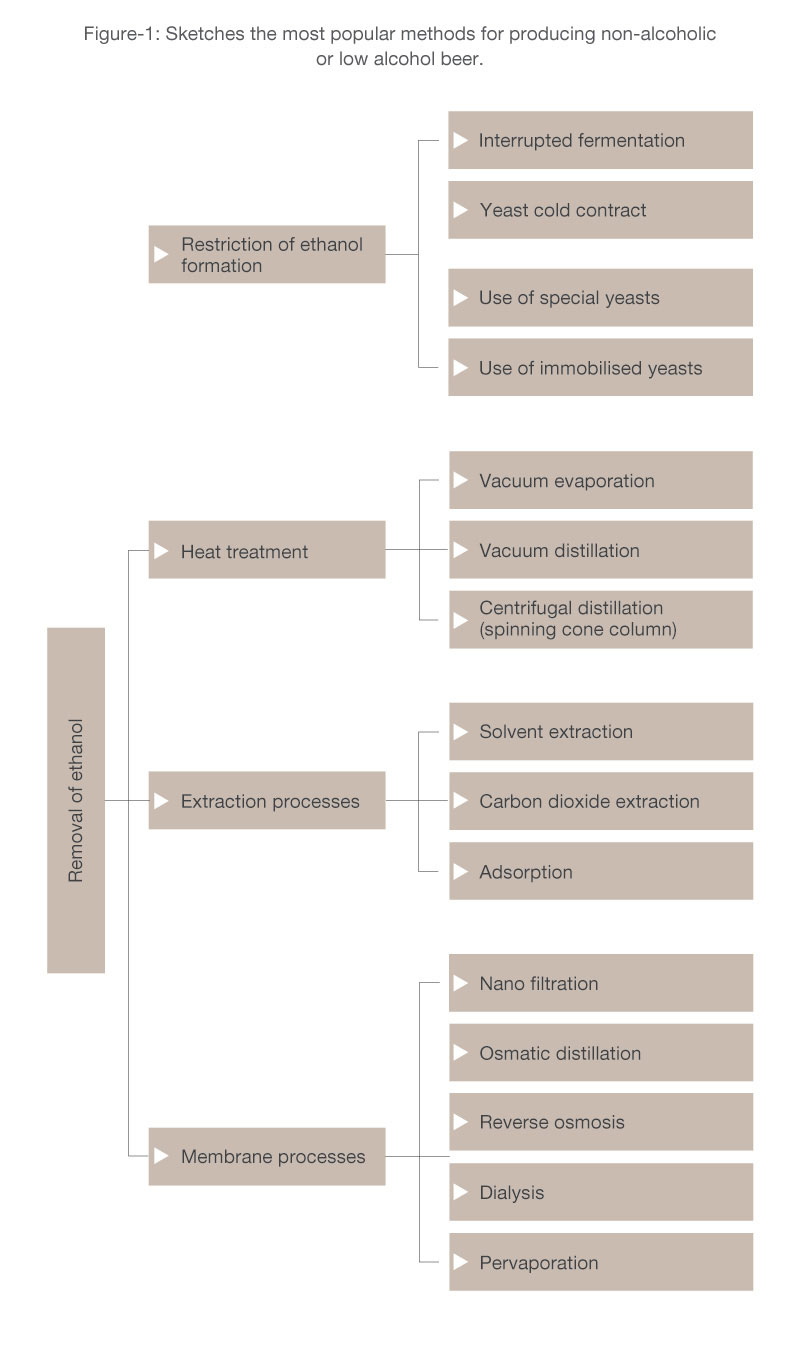 Usually, the processes for producing non-alcoholic beer can be divided in two major categories:

The production of non-alcoholic or low alcohol beer by restricting the ethanol formation can be accomplished by interrupting the beer fermentation and by using special or immobilized yeasts in order to keep the ethanol content very low.

Interrupted fermentation is performed at a temperature lower than a regular fermentation, until reaching an ethanol content below 0.5 % v/v. The fermentation is then stopped by removing the yeast (by centrifugation or filtration) or by flash pasteurization. The beer is then matured at very low temperature (0 – 1oC).

The restriction of ethanol formation can be achieved by substituting typical beer yeasts by special yeast strains, such as Saccharomyces ludwigii species, that ferment fructose and glucose and do not convert maltose, resulting in a beer with low alcohol content (less than 0.5 % v/v) and higher content of sugars.

In order to obtain a non-alcoholic or a low alcohol beer, ethanol can be removed from a completely fermented beer, and then containing the original aroma profile.

In heat treatment processes, ethanol is removed from the original beer by means of heating. At atmospheric pressure, the ethanol boiling point is 78o C while water boils at 100o  C, so applying a temperature lesser than 100o  C, alcohol evaporates preferentially and its separation from beer is possible – single or multiple stage distillation. However, high temperature is unbeneficial to heat sensitive compounds, which can suffer physical or chemical modifications. These changes lead to a decrease of beer quality during the dealcoholization process. In order to overcome this disadvantage, low pressure or vacuum can be applied and consequently the separation of ethanol can be achieved at moderate temperatures (lower than 78o  C).

In vacuum evaporation beer is heated with steam, under vacuum, in plate evaporators. The evaporated beer flows to a separator where the dealcoholized beer is collected from the bottom and the ethanol rich vapour is led to a condenser. In order to reduce ethanol content even more, alcohol free beer can be made recirculating through the plate evaporator or through multistage evaporators.

The column comprises a rotating central shaft and spinning cones attached to the shaft inserted with static cones fixed to the column wall. The beer travels down through the stationary cones due to gravity force and flows up through the spinning cones as a thin layer under centrifugal force. The stripping medium (e.g., steam) is fed at the column bottom and collects the alcohol. The vapour with alcohol is carried out of the column for being condensed. The dealcoholized beer flows down the column and is collected from the bottom outlet.

Extraction processes use an extraction medium to remove ethanol from beer.

In solvent extraction, feed beer contacts with an immiscible phase (the solvent, e.g., pentane or hexane) that presents a good solubility to ethanol. Ethanol is thereby removed from the beer into the solvent.

Membrane is a semi-permeable physical barrier, placed between two bulk phases, which allows the transport of one or more species between these phases. This transport is controlled, among other factors, by membrane nature. In membrane processes, the product which is intended to be treated (the feed stream) flows tangentially to the membrane surface and is separated in two fractions, the permeate that crosses the membrane and the retentate that remains in the feed side. This type of separation is known as cross-flow filtration and it can be applied to the dealcoholization of beer. Various membrane separation processes can be used differing in the physical effects that allow the ethanol separation.

The recovery of beer aroma compounds plays an important role during the production of non-alcoholic beer, since most of the above-mentioned processes for producing alcohol free beers result in a product whose aroma profile is unpleasant or distinct compared to the homologue alcoholic beer.

The recovery of natural beer compounds can be achieved by:

Pervaporation as a promising process for beer aroma recovery

As mentioned before, pervaporation (PV) is a membrane separation process based on cross-flow filtration, in which a feed liquid mixture contacts with a non-porous membrane and some of the feed compounds preferentially permeate through it. Vacuum is applied to the permeate side allowing the permeating species to leave the membrane in the vapour phase.

Nowadays, an increasing trend in the use of pervaporation for recovering aroma compounds in food applications, especially in the recovery and enrichment of aroma compounds from fruit juices as well as from fermented beverages, such as beer or wine.

The most distinguishing aroma compounds are formed during beer maturation and are characteristic of a finished beer. These aroma compounds belong to two main chemical groups, higher alcohols and esters, and their concentration has a great impact on beer organoleptic quality.

In recent years, there has been an increased market share for no-alcohol and low alcohol beers. This is mainly due to the health reasons (such as obesity and other issues associated with high alcohol consumption), safety reasons (in the workplace or traffic roads) and increasingly strict social regulations and also the fact that alcohol consumption is forbidden in few countries because of religion as well as the awareness of problems that alcohol can bring about regarding civil responsibilities. No alcohol beers are recommended for specific groups of people such as pregnant women, sporting professionals, people with cardiovascular and hepatic pathologies, and medicated people. Consumers in such conditions are willing to have a beer as close to the conventional types as possible, from sensory point of view, a goal that is very difficult to achieve, because these beers suffer from having an artificial and immature flavour as well as inappropriate body and foam head. For these reasons, no-alcohol and low alcohol beverages have drawn social, technological, and economical interests. A variety of methods have been proposed and practiced for industrial production of no-alcohol and low alcohol beers with acceptable organoleptic properties.

Beer exerts various healthful effects on the human body due to its different constituents. However, consumption of no-alcohol beers does not provide the healthful effects of alcohol intake (in low amounts) as is the case with normal or low alcohol beers. On the other hand, it does not comprise adverse impacts of high alcohol intake caused by indiscriminate consumption of high-alcohol-containing beers. When consumed at moderate levels, low alcohol beers can be a good alternative to the regular alcoholic beers from the health point of view.