The success of the most important event for India’s beverage industry remains unchecked: The trade fair alliance consisting of drink technology India (dti), organized by Messe München, and indiapack pacprocess and food pex India, organized by Messe Düsseldorf, recorded higher numbers of exhibitors and occupied more exhibition space. The number of visitors remained at a very high level as well. The fair’s further growth reflects the dynamic development of the Indian beverage and liquid food market, in which high growth rates are again forecast to climb. 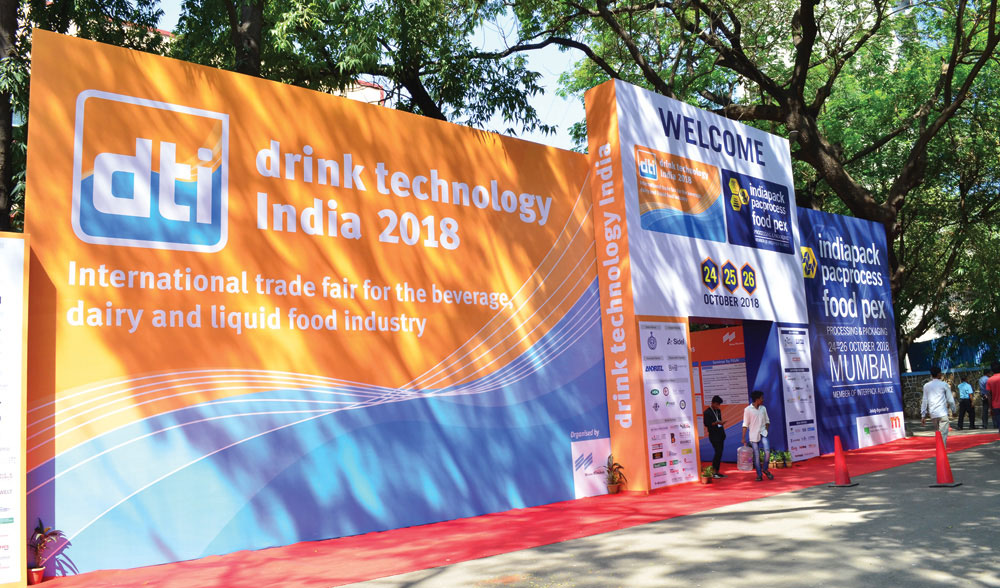 “The figures speak for themselves: 201 exhibitors from 17 countries presented their products and solutions at dti. They occupied around 23 percent more net exhibition area than at the last event in Mumbai,” Georg Moller, head of the business division at Messe München, said in describing the fair’s success. Bhupinder Singh, the CEO of Messe Muenchen India, was also pleased by the continued growth: “It underscores the huge meaning of dti for the Indian market.”

Together with indiapack pacprocess and food pex India, 343 exhibitors presented themselves on an area of around 16,500 square meters from October 24 through 26. Moller pointed in particular to the very professional cooperation with the partner Messe Düsseldorf: “Joint staging of the fairs is not only a big gain for us. As a result, visitors obtain a comprehensive overview of all areas of the beverage and packaging industry.”

This offer was widely used by visitors, as for example Partho Ghosh, Executive Vice President KHS Filling & Packaging Worldwide says: “We had many talks with visitors and have received new leads this year. The Indian beverage industry is looking for innovations which will bring the development of the industry a big step forward.”

Richard Clemens, Managing Director of the VDMA Food Processing and Packaging Machinery Association, also described dti as an important driving force for the industry: “For companies that produce machines to make, process and package beverages and liquid-food products, India is one of the major sales markets in Asia.” The outlook for the market is consistently positive. In the process, the important role played by dti will continue to grow.

dti’s supporting program was highly popular among visitors and very well attended on all three days. Day two of the Round Table Talks revolved around beer, wine and spirits. According to the VDMA, India ranks ninth among the top ten sales countries for alcoholic drinks. Beer is the top-selling alcoholic beverage in India. The experts generally agree that demand for high-quality beers and for wine and spirits will grow as the population’s income rises.

Visitors were able to try Indian beer variations at the new place2beer. The focus at the platform was not only on beer tastings, but above all on networking and sharing knowledge among representatives from microbreweries, medium-sized and industrial breweries, and brewing suppliers. In the Craft Beer Seminars, experts from the scene demonstrated what impact microbreweries are having on beer brewing and what trends are influencing the craft beer sector. Bruno Bonacchelli, brew master at Castle Malting Belgium and one of the speakers at the seminar, was enthusiastic: “I’m impressed by the high technical standards in the Indian craft beer market and about how quickly the latest methods and technologies are adapted.” Further talks were given by representatives from Brewbot Mumbai, Gateway Brewing Mumbai and White Owl.

The focus of the buyer-seller meetings was networking and initiation of new business relationships. About 430 discussions between exhibitors and potential customers were held, a clear indication of the concept’s popularity. The customers who made a special point of attending the trade fair to create new business relationships with exhibitors included Bohemian Beer, Good Drop Wine Cellars, Hindustan Coca Cola, Jyanti Beverages and Parle Agro.

Two new additions to the supporting program of dti in Mumbai were the seminar of the Oil Technologists’ Association of India (OTAI) and the seminar of the Food Safety and Standards Authority of India (FSSAI). The OTAI Seminar addressed the growing importance of oils and fats in the Indian market and in particular challenges in packaging edible oils. The FSSAI Seminar provided insights into the regulations on and regulatory framework for beverages in India.

drink technology India is staged in conjunction with indiapack pacprocess and food pex India of Messe Düsseldorf. This combination of four trade fairs covers the topics of drink technology, dairy and liquid food together with those of the related packaging industry (drink technology India), packaging and related processes (pacprocess India), packaging materials and aids as well as machines and technology for the production of packaging materials and aids (indiapack) and also food and confectionery processing and packaging (food pex India) all under one roof and is unrivaled in the region. The next dti in Mumbai will be held from December 9 to 11, 2020. In 2019, dti will be held in Bengaluru for the first time. It is scheduled for February 28 to March 2. As part of the trade fair alliance, the event will also be held next year once again – from December 5 to 7 in New Delhi.

drink technology India (dti) is the most important event for the Indian beverage, dairy and liquid food industry. It takes place in conjunction with the indiapack pacprocess and food pex India trade fairs of Messe Düsseldorf. The event location alternates between Mumbai (Bombay Exhibition Centre) and New Delhi (NSIC Exhibition Complex). In Bangalore dti is the sole organizer. The rotation is as follows: in even-numbered years dti takes place in Mumbai, in odd-numbered years in Bangalore and New Delhi. 298 exhibitors presented their developments and solutions at the last drink technology India, indiapack pacprocess and food pex India, in Mumbai in 2016. 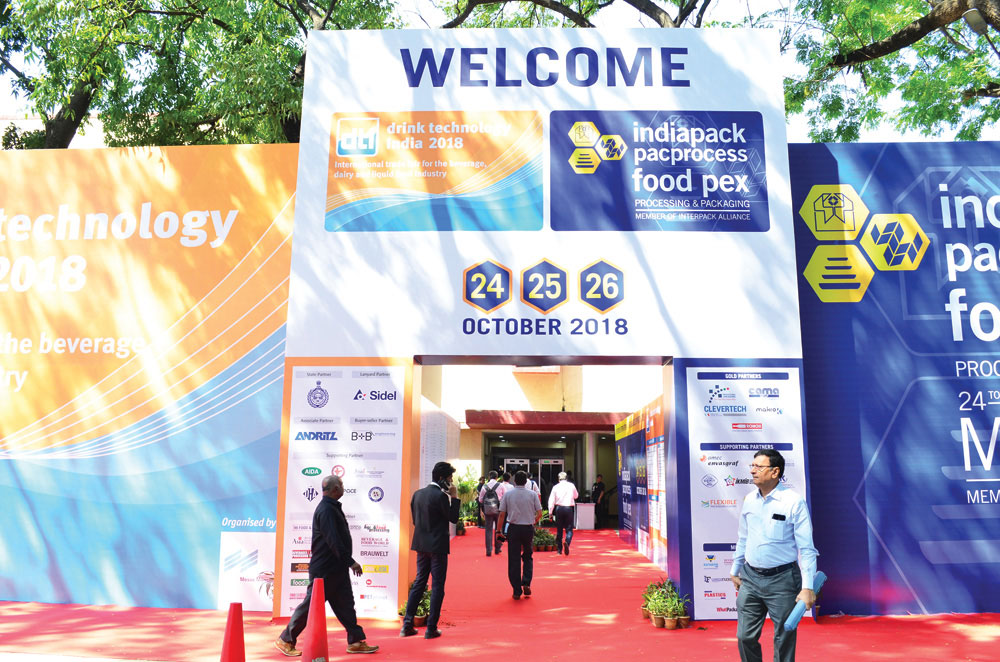 About the drinktec worldwide network

drinktec worldwide represents a strong global network that unites drinktec – the world’s leading trade fair for the beverage and liquid food industry in Munich – with the drink technology India (dti), CHINA BREW CHINA BEVERAGE (CBB) and food & drink technology Africa (fdt) trade fairs. drink technology India, CHINA BREW CHINA BEVERAGE and the food & drink technology Africa are the leading platforms in their respective countries for the industry. The trade fairs in China (Shanghai) and Africa (Johannesburg) take place every two years. In India the event takes place in Mumbai in even-numbered years. In odd-numbered years the event takes place twice a year: in Bangalore in the spring, in New Delhi in autumn.

With a total of 2,847 exhibitors and more than 140,000 visitors in Munich, India, China and Africa, Messe München is the world’s leading event organizer for the beverage, food, packaging, milk and liquid food industry.

Messe München is one of the leading exhibition organizers worldwide with more than 50 of its own trade shows for capital goods, consumer goods and new technologies. Every year, a total of over 50,000 exhibitors and around three million visitors take part in more than 200 events at the exhibition center in Munich, at the ICM – Internationales Congress Center München and the MOC Veranstaltungscenter München as well as abroad. Together with its subsidiary companies, Messe München organizes trade shows in China, India, Brazil, Russia, Turkey, South Africa, Nigeria, Vietnam and Iran. With a network of associated companies in Europe, Asia, Africa and South America as well as around 70 representations abroad for over 100 countries, Messe München has a global presence. 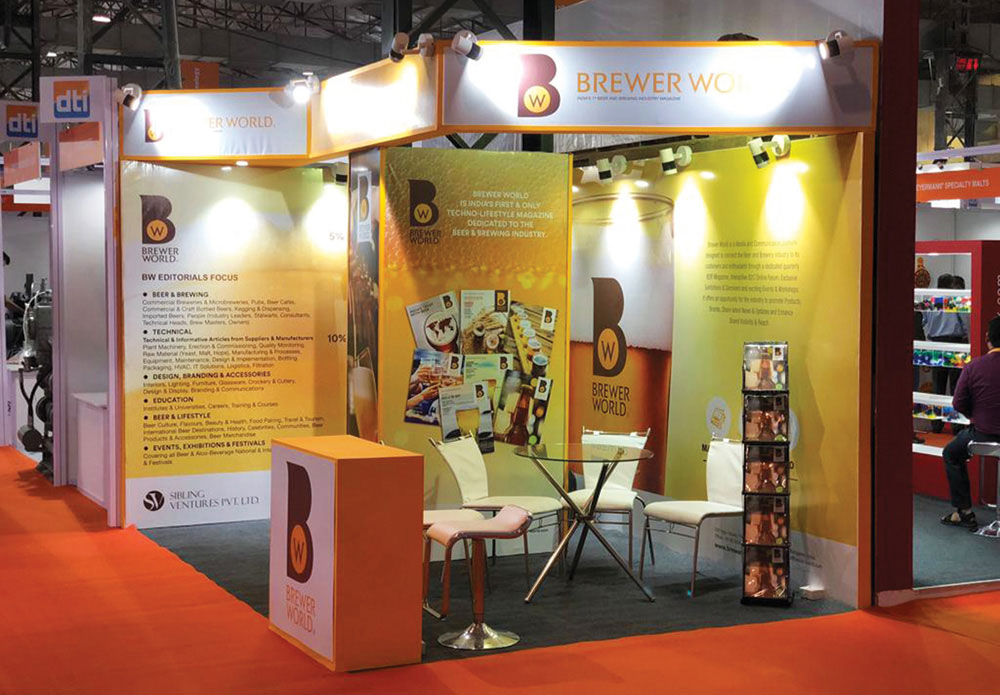 This Monsoon, Get Cheersing With These Newly Infused Brews By Gateway Brewing Co.